Paris Musées recently allowed copyright-free access to the use of 150k of their artworks. We at Artivive have seized this opportunity and launched an open call to bring these masterpieces into augmented reality. The result was an exhibition at the Artivive Art Space in Vienna, Austria, in July 2020, showing the 12 best submissions that build a bridge between traditional and digital art.

In this series of interviews, we introduce you to the people behind the best submissions. This time we talk to the architect and artist Julia Dorninger. The artist used augmented reality to share her personal emotional experience with others and manages to show how contemporary classical art can be. 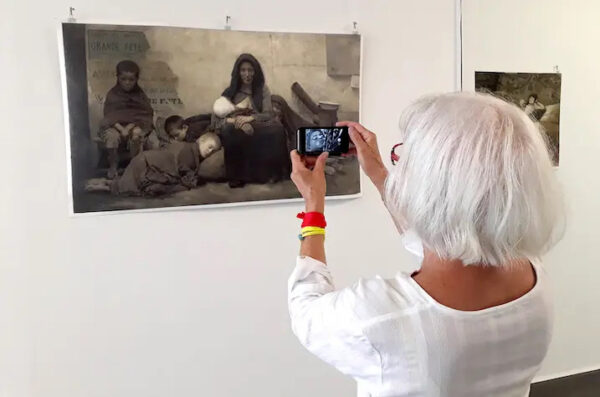 I am an architect and artist and my work is mainly focused on the relationship between action and space. In my research projects at the crossroad of art and architecture, I question the meaning of space, analyze its origin, appropriation, and transformation. The French sociologist Henry Lefebvre was one of the first to broaden the conception of space to include also a social component. For Lefebvre space are a social product that is created through actions and social interactions. Going along the lines of Lefebvre’s theories I want to show that space has no inner or outer stability, on the contrary, it has to be characterized by its omnipresent ephemeral features. I examine how space can be structured or restructured through social actions, situations that will bring new parameters leading to unexpected spatial perceptions. In my workspace is not conceived as a static entity but as an ongoing process. Space is viewed as continuously produced, never regarded as closed, developing its structure depending on varying situations. I have been developing a multi-faceted approach, ranging from drawing and photography to mixed media. The output of these artistic processes often turns out to be installations into which previously made works are integrated.

2. How did you come across Artivive?

Last December Gabriele Baumgartner curating the exhibition “Digitalisierung und/oder/vs Kunst: Ein Ende des analogen Schaffens?” had invited me to take part in a panel discussion that was held there. Sergiu Ardelean (CEO of Artivive) was on the panel. He presented the App and I was enthusiastic about its possibilities at once. 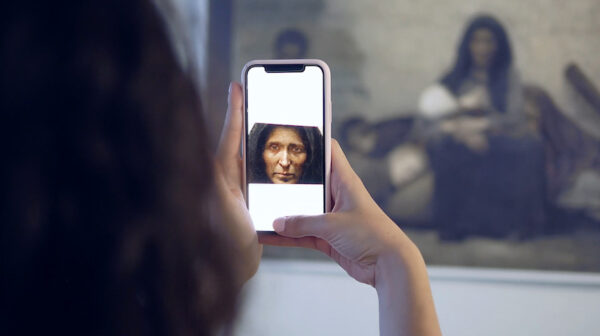 3. What inspired you to take part in our open call?

Understanding what art is about is never easy and grasping art is not everyone’s concern. Artivive contributes to reducing fears to come into contact with art. I think art education should always go beyond the factual. With AR the viewer gets the opportunity to access the artwork on a sensual-emotional level. AR has the potential to engage the viewer with more than just the sense of vision.

When studying architecture I spent a semester as an exchange student at ENSA Paris La Villette. During this time I often visited museums. This way I got to know the paintings of Fernand Pelez which I came to appreciate highly. These paintings have something very touching for me and I would like to share this personal emotional experience with others through the possibilities that AR offers. Moreover, I would also like to convey the high actuality of Fernand Pelez’s pictures.

4. Which masterpiece from the collections did you choose and what was the concept behind your augmented reality extension?

I have chosen Fernand Pelez’s Sans Asile. Though Pelez was a French painter of the late 19th century, he didn’t conform to the typical traditions of his time. He created realistic paintings that were not approved by his contemporaries. He set his focus on painting scenes with beggars, homeless families, and circus performers, snapshots of the impoverished members of society. Thus he became known as the painter of poverty, a naming which is corroborated in the use of the word misère in his titles. Clearly, by painting suffering people he opposed salon painting, the prevailing style then. It was just about ten years ago that Pelez was rediscovered and his contribution to French painting in the late 19th century was brought to light.

I consider Pelez’s works to be powerful and strongly connected to today’s current affairs. I associated the subject of the painting of 1883 with my own work from 2018 about the refugee crisis. My intention was to provoke in the viewer a kind of personal concern and create a feeling of being involved in the claims of the painting. What does this have to do with me? How much does it affect me? When I started to set up the work on the augmented reality extension I began to develop an emotional closeness to these actually strange people in the painting and at the same time, I questioned their fate and background. I also let autobiographical parts flow into the story that I wanted to tell by lifting Pelez’s work out of its original context and projecting it onto my own everyday life. This way the depth of the image increased and ascertained for me some kind of timelessness that I hope a viewer will experience likewise.

5. What do you find most exciting about augmented reality art?

For me, a very appealing feature of AR is that real-world objects are not replaced but replenished in a way that a kind of coexistence between the analog and digital worlds of art is created. Formulated more philosophically, there takes place an oscillation between objective and subjective space of perception and experience leading to a new moment of heightened tension for perception. Moreover, AR provides the possibility for me to add a variety of new layers to a work of art without losing anything of its original content.

6. What are you working on now and what are your future plans?

“Where the Children Sleep” is a series I have started in 2018 that will be continued. In this series, I deal with places where refugee children have to spend the night. Currently, I am interested in the very moment of the children’s arrival and my own feelings about this event.

7. Any advice for those who would like to use augmented reality for their art practice?

Augmented reality is much more than a modern tool of technology to enhance visual perceptions, it endows one’s own work of art with a new depth and furthers new processes of innovation.