The impact of any story lies in the hands of the listener just as much as the storyteller. It wouldn’t matter if a story could change the world if no one listened to it. Nor would it matter if the entire world listened to a story with no impact as they would be just as they were before, unchanged. The stories that Marc and Scarlett tell, impact their audience through their thoughts and emotions. A beautiful mask on the surface, with the truth hidden in the depths of their artwork.

We are very lucky to have Marc Marot as the next featured artist in our interview series, whose artworks, in collaboration with Scarlett Raven, tell many stories that come to life. 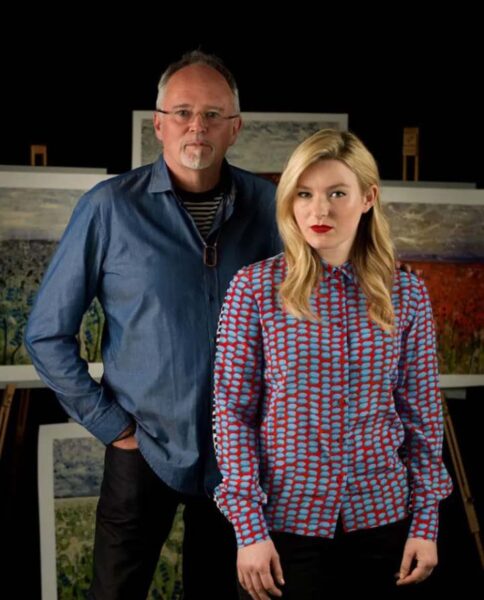 I am a digital artist and I work in partnership with oil painter Scarlett Raven. We started working together in 2014 and together we created an exhibition named ‘The Danger Tree’. The exhibition takes its subject matter from the stories and poetry of the first world war.

Prior to working with Scarlett, I was at the top end of the UK music industry. I studied art but followed my other passion for music. My career included 18 years of serving as the president of each of the Island records companies. I worked with U2 for 18 years and was in charge of their worldwide career from 1990 to 2000. Under my management, the label signed a varied range of artists from Elbow, Pulp, PJ Harvey, The Cranberries to Nine Inch Nails and NWA. My core skill is in developing talent and when Scarlett came into my life I was the chairman of a large London-based management company developing the careers of music artists, top football players, and Formula 1 drivers amongst others.

Scarlett decided I needed to take on a painter! for two years I refused on the basis that it was a world I knew little about and had no connections in. I left the door open, however, telling her that if I came up with a big idea I’d come back and talk to her.

A number of Artivive’s competitors came calling because we managed big ‘influencers’ and stars like Jessie J and Ella Henderson, and I saw the potential for AR and art immediately. I re-approached Scarlett and she said yes. We created six augmented paintings and I thought my role was simply to show Scarlett what she should be doing on the AR side, but she enjoyed working with me and insisted that if the work was to have a future, it had to be in partnership with me.

All the paintings in the show are huge 4’x4’ paintings, thick with oil paint. Scarlett is a graduate of London’s prestigious Central St Martin’s school of art and her work is very vibrant and beautiful. We’ve had nine major exhibitions of our work in UK cities such as Belfast, Manchester, Liverpool, Birmingham, and London amongst others. In November 2019 we open our tenth show at London’s National Army Museum which will last for three months.

Augmented reality reveals a dark and often disturbing substrate underneath the pretty paintings. We utilize some of the UK’s most powerful actors such as Christopher Eccelestone, Gemma Arterton, Vicky McClure, and Sean Bean to perform some of the greatest and most emotional poetry of the great war, and then we add specially written music from film composer Marc Canham to complete the emotional impact. from the very moment we launched, we made people cry, which was not our intention but was an incredible endorsement for our work.

Scarlett and I were adamant that we didn’t want our work shown on a white gallery wall like other art, so continuing on the war theme, I commissioned a wonderful movie set designer called Kave Quinn to build us a portable set portraying a destroyed art gallery. She designed it based on ww1 photographs from Picardy in Northern France taken in June 1916 just prior to the launch of the battle of the Somme. It weighs five tons and we take it (and a team of builders!) to every city we exhibit in.

The first show was in a pop-up space in London’s Greenwich and not only did it attract great media support (the BBC called us the UK’s first ‘Augmentists’) but it also was a huge and unexpected hit commercially. We partnered with a very skilled and powerful gallery company called Castle Fine Art and by the time the show ended we had sold out of 1110 limited edition prints and the 10 paintings on the war, grossing over £1,000,000. It forced my hand to quit the company I co-owned and to embark upon the life of an artist. 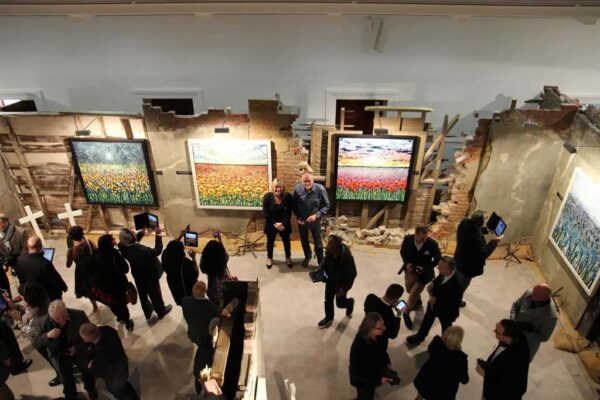 2. What are some of the recurring themes in your work and why are you interested in them?

We are storytellers. All or work is based on using technology to tell a story because it’s one of the main things that ‘analog’ art cannot really do. I believe it marks us out as being a bit different from many others utilizing AR in their work.

Some people in the world of AR may well think that our work is rather simple from a technology POV but that’s a deliberate choice. Since 2016 we have enjoyed over 70,000 visits to the exhibition since we launched. Because the subject matter is WW1 we tend to attract a mixed audience including an older audience not familiar with the tech we employ. When people visit our show they are handed an iPad and headphones and are instructed how to interact with the paintings. Once visitors start the exhibition experience we want them to become immersed in the storytelling rather than becoming amazed at the technology. As such we avoid using 3D and other tricks of the trade which can pull people out of the story and back into the real world (whilst they try to work out how we achieved the clever bits). As such we make no apology for sticking within a 4’x4’ square. Our next subject matter is less intense however and will employ 3D.

3. How did you come across Artivive and why did you choose to use augmented reality as part of your artistic practice?

At first, I worked with Blippar, but soon became frustrated with the cumbersome process they insist creators utilize. The moment I saw the Artivive interface I know it was for me. To be able to finish the creation of a work and have it ‘live’ within five minutes on a worldwide basis is bliss!

As to why we use AR? I refer back to my previous answer… storytelling. Please don’t think I’d have the gall to compare our work with the great painter Edvard Munch, but whilst being very moved by his painting ‘The Scream’ you’d have to be pretty disturbed to cry. Our work makes people weep every single day…. and that’s because the AR ‘package’ of brilliant poetry, great performance, emotional music, and direct and simple animation, and that emotional reaction is perhaps something new in fine art I believe. Each of the 51 paintings we have created can be compared to a scene from a movie… and who hasn’t wept at a sad scene from time to time?

4. How has Artivive impacted the work you are producing?

It’s made my life so much simpler and has sped up my process hugely. It’s also made the life of the 42 galleries that carry our work easier too as the load time is blisteringly fast even on 3G.

5. What tools do you use to create the animations for Artivive?

We like to think we are a fine art duo like Gilbert and George…. but in fact, we are Wallace and Grommit! we use stop motion for all our work. Scarlett has a camera on the ceiling of her studio and a canvas on the floor. Every single daub of paint is recorded until she has as many as 10,000 photographs of the work in progress. once I have them I create the animation which is interwoven with the paint. I add the storytelling, however, Scarlett also incorporates the story into the painting too. My studio also creates separate animations if required all using old-fashioned cell animation.
I assemble FCPX and use various Adobe products too. I use the excellent freeware app ‘Handbrake’ to do the compression. 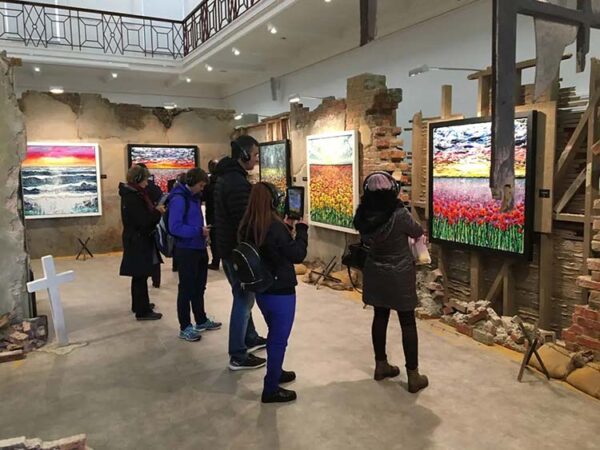 6. Digital art forms have been around for a while now, but how do you think augmented reality will influence the arts?

I truly believe that it’ll be huge. At the moment most galleries are too complacent… for example, they make money renting headsets, they hate photography, etc… when we exhibited in the Martin Luther King museum in Liverpool all the curators of Tate Modern Liverpool came to the show and I gave a talk telling them how it works… they were all envious of the tech; saying that it would really help explain some of the more abstract work they have on the show, but moaning that ‘management’ wouldn’t allow it.
Be patient: it will catch on.
I hate discussing the commercial side, but it’s a reality we all need to be aware of… our 9 shows have now grossed around £4m in sales. this is in three years. People really like AR and the more than those in the arts use it (and have success) the more it will penetrate into the real world of the mass market.

I’m very pleased to say that The National Army Museum is acquiring a new work we are creating with their archive which will put AR into a National Art collection possibly for the first time in the UK.

7. Any advice for those who would like to use augmented reality for their art practice?